In early January, Kansas Pregame contacted 6-Man football coaches in an effort to name a first ever Top 6 team of seniors in Kansas. The results are in and here are the Top 6 players in Kansas as voted on by the coaches.

This is the final of six individual player profiles highlighting the Top 6 selections released in no particular order:

Moscow senior Adan Granillo is quite simply, explosive. He made that clear as early as the spring of his sophomore year, when he was a state qualifier in both the long and triple jump, finishing sixth in the triple at the 2019 Kansas State High School Track & Field Championships. If you’re searching for more proof, there is plenty of that on the football field as well.

During his senior season, Granillo blazed by defenders and closed on ball carriers with reckless abandon. On offense, Granillo sprinted for an impressive 705 yards on 38 carries to go along with 16 of 40 passing for 368 yards and 15 combined touchdowns over the course of eight games.

“Adan was our speed guy,” Wildcat head coach Bret Harp said. “If there was even a slight gash in the defense and he found it, watch out, he was going to score. He not only had speed, but his ability to make tacklers miss was amazing. There were so many times he'd leave would-be tacklers wondering where he went.”

The other side of the ball was also a strength for Granillo, as he racked up 44.5 tackles, four interceptions, two fumble recoveries and a sack.

“He also played defense with the ability to stop the pass, but woe to the QB or running back that turned up the field, because Adan had the ability to come up and just punish the ball carrier. He never hit high, but took the knees out of the runner,” Harp said.

His efforts would earn him a place on the first ever Kansas Pregame 6-Man Top 6 list, a spot on the 6-Man All-Star team, recognition as the Sports in Kansas Defensive Player of the Year, Kpreps.com Defensive MVP and All-State honors as a defensive back and return specialist.

The two-time All-State return specialist was honored for a second consecutive year despite only returning a limited amount of kicks during both seasons. The Wildcats’ 2020 matchup with Natoma was an example of why his opportunities were limited. He was kicked to three times during that game and returned two for touchdowns. For the most part, teams wisely avoided kicking to him altogether.

Moscow would make it to back-to-back Wild West Bowl title games during Granillo’s junior and senior seasons. After a perfect 10-0 championship year in 2019 that saw them dominate a matchup against Cheylin 52-6 the Wildcats would be bested in a finals rematch with Cheylin, 46-0.

“It was a great time playing for Moscow the past couple of seasons,” Granillo said. “Practices and weightlifting was always intense since we all didn’t like to lose so we always gave it 100 percent each rep to better ourselves. Being around these talented teammates I had on my side was always a great time on and off the field.” 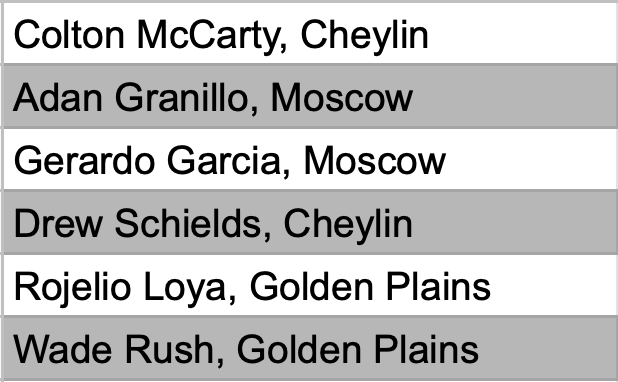