Tony’s Pizza Events Center in Salina is set to host the first KSHSAA Girls Wrestling State Championship on Thursday. Find a schedule for the day here. Find a link to Track Wrestling's results from the tournament here.

Only one school will claim the inaugural state championship. Washburn Rural will take the No. 1 ranking into state, while Great Bend and Osawatomie round out the top three.

Along with unranked Garden City, Rural is sending the most competitors of any school with six. Great Bend, ranked second, is sending five to state, while Fort Scott and Spring Hill are both sending four. Check out the final girls all class rankings at the end of this article.

Nickerson’s Nichole Moore was the KWCA Wrestler of the Year at the McPherson Regional on Feb. 14 and is the third-ranked wrestler in the country at 117, according to the latest National Girls High School Rankings.

Moore defeated Rose Hill’s Anaya Besco by fall at regionals. Burlington’s E’owynn Codney, who has a 24-3 record, is on Moore’s side of the bracket and could be her biggest obstacle toward a state championship.

Teammate Maddi Miller suffered her first loss of the season at regionals and will take a 16-1 record at 235 into state. Miller is ranked fourth in the state and will have to go through top-ranked Dajia Anderson of Washburn Rural to reach the finals.

The 235 division also features Salina Central’s Rebekah Franklin and Olathe West’s Makayla Rivera, who are a combined 30-3. Of the 12 wrestlers in the 235 division, 11 have winning records.

Hutchinson’s Kylar Smith is ranked sixth at 116. If she defeats Basehor-Linwood’s Olivia O’Donnell in the first round, she will face Moore in the quarterfinals.

Fellow Salthawk Maritza Jimenez has a 28-1 record at 123. Ranked third, Jimenez has undefeated and top-seed Jordyn Knecht of Paola on her side of the draw.

Elise Rose of Marysville, who beat Jimenez in the regional finals by a 7-4 decision, will likely be waiting in the state finals. Rose is 15-0 this season, and ranked 11th nationally at 122.

At 101, Osawatomie senior Amanda Newcomb is the favorite. Newcomb, 18-0 on the year, is ranked 10th nationally. Concordia’s Kassidy Leiszler is likely the largest obstacle between Newcomb and a state championship.

At 109, top-ranked Alexis Allen is 27-0, but she should receive a sufficient challenge throughout the day. Third-ranked Isabell Ortiz is on Allen’s side of the bracket, while Wellington’s Anna Cullens and Rural’s Jaiden Taggart - a combined 40-2 - make up the bottom half of the draw.

At 130, top-ranked and undefeated Madyson Gray of Lawrence Free State could be on a collision course with third-ranked Breanna Ridgeway of Great Bend, 32-1, in the semifinals. In the bottom half of the draw, second-ranked Anjelina Serrano of Garden City and fourth-ranked Brianna Randles of Topeka West should make for another good semifinal.

Kansas City Piper’s Sara Lake headlines a deep 136 class. Lake is undefeated and bested second-ranked Cassidy Anderson of Caney Valley in the Paola Regional final by a 4-3 decision. The two are on different sides of the bracket, meaning a state-championship rematch is not out of the equation.

The top four wrestlers in the state at 136 all came from the Paola Regional. Look for Andover Central’s Xara Bacci and Valley Center’s Cheyenne Blackwood to challenge for a state championship from the McPherson Regional.

Onaga’s Morgan Mayginnes is not the top seed at 152, but she is the favorite. Mayginnes is ranked sixth nationally and sits at 10-0 on the season. Wichita South’s Marissa Murray (22-1) or Ottawa’s Darby Weidl (30-1) will likely be awaiting Mayginnes in the finals.

Council Grove freshman Jolie Ziegler enters state as the top-ranked and only undefeated wrestler at 170. On Ziegler’s side of the bracket, Olathe South’s Kianna Skinner - the Paola Regional runner-up - will likely be waiting in the semifinals.

Rural’s Rebekah Smith, who won the Paola Regional, will likely have to get through second-ranked Lyndsey Buechman of Abilene to reach the state finals.

If anyone takes down Junction City’s Elisa Robinson at 191, it may qualify as upset of the tournament. Not only is Robinson undefeated this season, she is the top-ranked wrestler at 180 pounds in the country.

Rural’s Jaliah Johnson won the Paola Regional and could be waiting in the finals.

In total, 81 schools will be sending wrestlers to Salina. Matches are scheduled to begin at 9 a.m., and gates open at 7:15 a.m.

For all there is to see and do in Salina, including shopping, dining, Rolling Hills Zoo, the Smoky Hill Museum, Central Mall, the exciting downtown revitalization and more, go to www.visitsalina.org or find Visit Salina on Facebook, Twitter and Instagram. 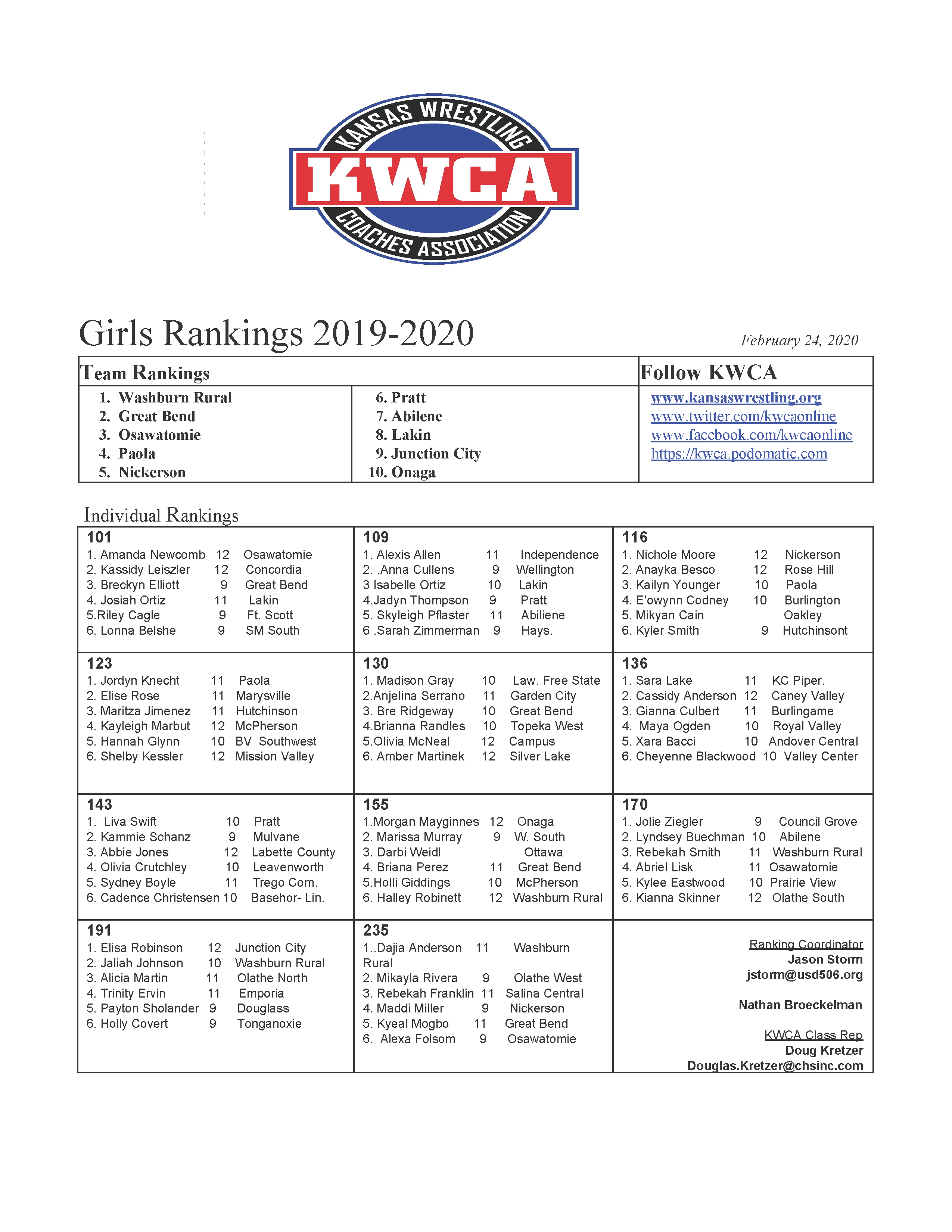