GARDEN CITY – It’s on rare occasions that you will see a late-season wrestling invitational with such a large field comprised of highly-ranked teams and individual competitors from such a variety of locales.

But that’s what wrestling fans, coaches and the wrestlers themselves will see first-hand on Friday and Saturday, Jan. 31-Feb. 1, at the 62nd Annual Rocky Welton Invitational here in Garden City.

The tournament, hosted by Garden City High School, is named for the legendary Buffalo wrestling coach, who guided the school to six Class 6A state team championships during the 1990s, including four consecutive crowns in 1990-91-92-93 and then back-to-back titles in 1998-99 before retiring.

Welton, who now resides in Abilene but cannot travel due to health reasons, was recently honored as one of two coaches and 10 former student-athletes to be inducted into the first class of the Garden City High School Athletics Hall of Fame.

This year’s Welton looms to be among the biggest and again, one of the best tourneys in the central plains, Colorado area with 42 teams entered from five states – Kansas, Colorado, Nebraska, Texas and New Mexico.

Among the contending teams are two-time defending champion Goddard, Kansas’ No. 1-ranked 5A and the top ranked team for all classes in the Sunflower State. The Lions won the tourney a year ago with 220 points to outdistance Pueblo, Colo. East’s 206 points. Kearney, Neb., placed third with 176.5 points and host Garden City occupied fourth with 141.5 points. Canyon Randall, Texas, took fifth with 131.5 points. Thus, of the top five finishing teams, they represented four states, and all return to the 2020 event.

“I think that’s one of the things that separates the Welton from so many other good tournaments,” said eighth-year Garden City head coach Carlos Prieto. “We’ve worked really hard to attract a lot of teams who will bring their best wrestlers, but might not field an entire team. So we get some really good overall teams, but more so a lot of outstanding individuals, too.” 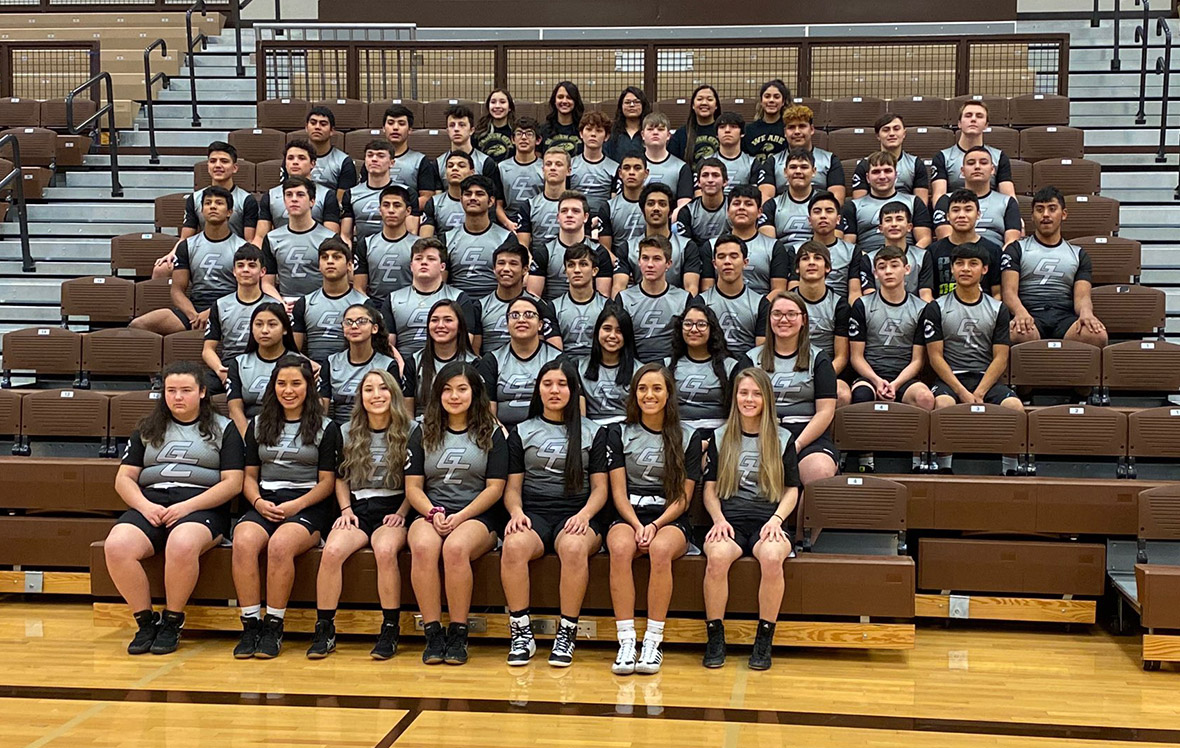 Above: Garden City, the host team for the Rocky Welton Invitational, will again field a squad that should be very competitive in this tough tourney. (Courtesy Photo)

For Goddard to repeat as team champion, the Lions will have to contend with Colorado’s No. 1-ranked Class 4A team in Windsor, bringing with it five individuals ranked No. 1 in 4A in their respective weight classes. Canyon Randall, Texas, is currently the Class 5A No. 2-ranked squad.

“I’m really excited to have Windsor in the field for this year’s tournament,” Prieto said. “It’s going to be quite the two days of wrestling. Randall will be a tough team as well.”

One feature of the Welton is that each weight class wrestles out to 16 places over the two days, with a 32-man bracket set up with piggy-back qualifiers in some weights.

“A lot of teams won’t want to compete in this because a wrestler could have as many as six matches in two days, and that’s a lot for this late in the season,” Prieto said.

Another distinctive feature is the seeding process utilized, since wrestlers are representing multiple states.

To eliminate a lot of seeding issues, Tim Yount of On the Mat in Colorado and Eric Johnson, Kansas All-Class Ranking Coordinator, each pre-seed wrestlers from their respective states. They then, do a conference call one day before the tournament to arrange the final seedings and assign the brackets for each of the 14 weight classes.

“A lot of tournaments just put their seedings on cruise control and allow coaches input,” Johnson said in a telephone interview Tuesday. “It creates a lot of extra time to have a seeding meeting especially where there can be disagreements on who has wrestled the toughest opponents. This way, we eliminate all the subjectivity.”

Johnson said he and Yount have been doing the Welton seedings for several years, and he enjoys the fact that there are wrestlers from multiple states to determine where they should be placed.

“Once Tim and I put our pre-seed names in, it only takes us about an hour to finish the seedings and the brackets,” Johnson said. “It’s worked really well the last two to three years. It saves a lot of time and a lot of disagreements.”

With more than a decade of involvement in state wrestling rankings, Johnson says the Welton’s reputation has continued to grow and expand.

“It’s arguably one of the toughest tournaments in Kansas,” Johnson said. “You’ve got teams from across the state, and with Garden City near the Colorado border, you get a lot of the top teams and individuals from that state and Tim really knows that group extremely well.”

“They’re really good, so I would expect they’ll be competing for the top spot again,” Johnson predicted. “But, there’s a lot of great individual wrestlers, so it’s always interesting to me to see how the seedings work out after the tournament is over.”

Among the top returners are Isaiah Gamez of La Junta, Colo., who won the 120-pound division a year ago over Newton’s 5A top-ranked Grant Treaster. JW Ruona of Canon City, Colo., was third at 126 a year ago.

Blue Valley Southwest’s Hayden Mills took second at 106 in 2019 and is now at 113 pounds. Garden City’s Silas Pineda was runner-up a year at 113 pounds while Great Bend’s Wyatt Weber was fourth at 106.

Another local, Jacob Holt of the Buffaloes, took second at 132 and is now at 138 pounds after claiming his second 6A state title a year ago. Goddard’s Nolan Craine and Trevor Dopps captured Welton crowns at 152 and 160 last year, but have moved up to 170 and 182 this season. St. James Academy’s Cade Lautt, a nationally-ranked 220-pounder, has a verbal commitment to University of North Carolina and returns after a second-place finish in 2019.

Of the 133 ranked wrestlers, 29 of them are ranked No. 1 in their weight class and school classification.

Prieto, who guided the Buffs’ resurgence in Class 6A to state team titles in 2013-14-15-16, said he uses the tournament as a measuring stick for how he thinks his wrestlers will fare later in February at the regional and then state tournaments.

“It’s not a complete look at how we will do, but I’ve always said to our kids that in some cases it is tougher to medal among the top six here than it is at the state tournament,” Prieto said.

Six mats will be utilized on Friday and early Saturday matches in The Garden. Prieto said there are few Kansas high schools that have the space for six mats in one gym.

“We’re very fortunate to have the outstanding facility we do, and we use the auxiliary gym for teams to hang out and warm-up,” he said. “As we narrow the matches on Saturday, we will reduce the number of mats.”

One of the other advantages of the tournament with such a variety of sizes of schools and representing different states is that it brings different wrestling styles to the mat as well.

“I think when you face different wrestlers with varying styles, it only makes you a better competitor,” Prieto said. “It’s one of the neat things about the tournament is that there’s so many quality wrestlers in each weight class, and the unknown of not having seen many of them really makes you focus on relying on your fundamentals.”

Friday’s opening round matches will begin at 9 a.m. Championship round 2 and consolation round 1 will follow. Quarterfinals will be next on Friday, followed by the consolation second round. At approximately 5 p.m., championship semifinals will be contested using four mats.

On Saturday, consolation round 3 matches begin at 9 a.m. Consolation round 4 and 5, using alternate bracket matches, will follow. That then will follow with consolation semifinals and then placing matches for seventh through 16th places. Championship finals, third-fourth and fifth-sixth place medal matches will begin at approximately 5 p.m., using three mats. At the meet’s conclusion, the Ed Cramer Outstanding Wrestler Award will be announced.